Blog - Latest News
You are here: Home / Featured / Economy / Alternative fuels vs. oil: Which is cheaper?

Something we hear a lot is “It’d be nice if America could use more alternative fuels that are cleaner and American-made, but they’re just not affordable compared to oil.” It’s time to put that myth to bed.

Apologists for the oil industry would like us to think that the reason alternative fuels haven’t put them out of business already is because they cost too much. However, a closer look at the cost of transportation fuels shows that, far from being expensive, alternative fuels are actually cheaper than oil-derived gasoline and diesel.

See for yourself, based on cost comparisons by the Department of Energy’s Alternative Fuels Data Center: 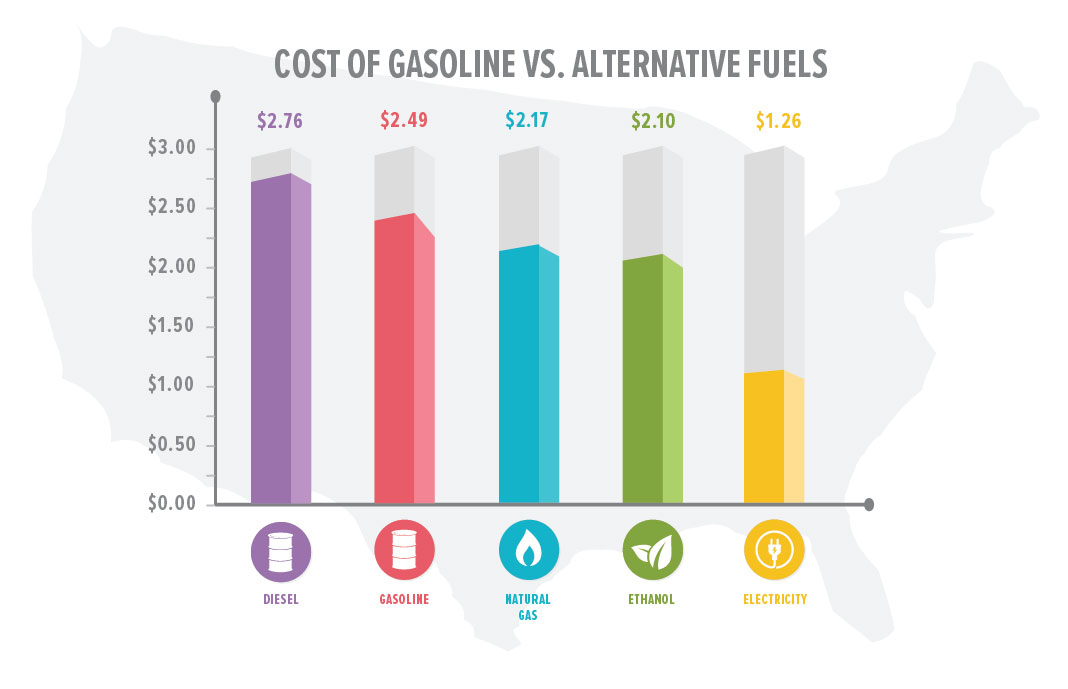 Gasoline, diesel, and ethanol price is per gallon. As electricity and natural gas are not liquids, their prices were determined using the gallon of gasoline equivalent (GGE)

Considering that the average American uses 656 gallons of gasoline a year, these savings add up. Someone using any three of the most popular alternative fuels—natural gas, ethanol (E85), and electricity—would be able to keep more hard-earned dollars in their wallet.

Running on natural gas instead of gasoline, a person would save $210 a year. On ethanol, $256.[1] And on electricity, a whopping $807 a year. If you’re currently using diesel, those numbers go even higher to $387, $433, and $984, respectively. By sticking with oil-derived gasoline and diesel, American drivers are missing out on hundreds of dollars worth of savings. All of this raises the question: If alternative fuels are cheaper (and cleaner), why haven’t they gained more widespread acceptance in America? The answer is: Oil has a monopoly on our transportation sector, generations in the making. Many people aren’t aware there are alternative fuels available (or that their car might already be able to run them). In many cases, even if they know about alternative fuels, they simply don’t have access to other options.

That’s why Fuel Freedom Foundation continues to fight for fuel choice. Because if gasoline and diesel were forced to compete with cheaper, cleaner, domestically-produced alternative fuels, our oil addiction would be a problem of the past.

[1] Due to ethanol’s lower energy content, savings could be slightly smaller because drivers may have to fill up a few more times a year when running on E85.

Toyota Embraces Hydrogen
Q&A: He ran Shell Oil Co. - and he thinks we use too much crude
To Use Less Oil, We Need To Think About Cars As Software Platforms
Jason Bateman Narrates ‘Pump’
New Releases: Movies, DVDs and Netflix Streaming for Week of September 14th
PUMP Releases Some Character Posters
Read before you download: What the critics said about PUMP
Winston, what would you do concerning natural gas?
Our Mission: Fuel Freedom Foundation is working to reduce the cost of driving your existing car or truck by opening the market to cheaper, cleaner, American-made fuel choices at the pump.
Will GM or Tesla buyers lose electric-car tax credits first? Self-driving cars use crazy amounts of power, and it’s becoming a pro...
Scroll to top