Blog - Latest News
You are here: Home / Featured / Economy / I put ethanol in my old Camry. Guess what happened next 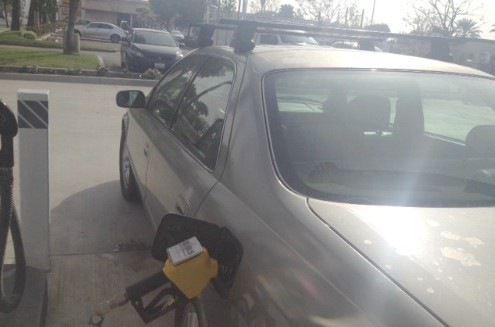 A G&M Oil Chevron/ExtraMile station in Fullerton was selling Pearson Fuels-supplied-E85 (up to 85 percent ethanol, the rest gasoline) for 85 cents a gallon, so it was worth the trip up the 5 freeway. I swiped my card, grabbed the nozzle (with its clearly labeled yellow “E85” insignia on the handle) and immediately began robbing Big Oil of a couple bucks’ worth of revenue.

I know from talking to smart car people that some drivers mix their own premium fuel by combining regular gas with E85. Since many newer cars can run just fine with higher concentrations than E10 (the blend we get at the pump every day), there’s not much chance of damage. But if you don’t have a flex-fuel vehicle (built to run on E85), and you cross a certain threshold of ethanol, the check-engine light will come on (and go away once the on-board computer recognizes its familiar gasoline again).

(Here’s the part where I warn the reader that this kind of fueling is not condoned, by Fuel Freedom, G&M, Pearson, the Environmental Protection Agency, or anyone else. Blends higher than E10 are only approved for vehicles model year 2001 and newer. This was my decision alone. And since my car, having logged enough miles for eight trips around the globe, is well beyond its useful life, and since I’m in the market for a new flex-fuel vehicle anyway, I figured, what the hell. OK, with the disclaimer out of the way, we can move on.)

The ethanol-haters will be displeased that my car started just fine. No warning lights flashed. The engine didn’t sputter and die. To answer the headline, all that happened was an utterly normal commute to work.

Although, I swear I got a slight boost in horsepower, which isn’t uncommon when putting in high-octane E85. I tore onto the freeway entrance ramp, overtook a new Audi, and zoomed down the 5 so quickly that the fast-food wrappers on the floor rolled about like tumbleweeds. My heap now feels like this: I’ll keep you posted about the car’s performance. But but the time it breathes its last, it’s more likely to be something else that kills it, not 25 percent ethanol.

Toyota Embraces Hydrogen
To Use Less Oil, We Need To Think About Cars As Software Platforms
Jason Bateman Narrates ‘Pump’
New Releases: Movies, DVDs and Netflix Streaming for Week of September 14th
PUMP Releases Some Character Posters
Read before you download: What the critics said about PUMP
Winston, what would you do concerning natural gas?
Will Pittsburgh be the center of a CNG revolution?
5 replies

Our Mission: Fuel Freedom Foundation is working to reduce the cost of driving your existing car or truck by opening the market to cheaper, cleaner, American-made fuel choices at the pump.
Oil gears up for another climate fight U.S. Navy leads the charge to break our oil dependence
Scroll to top