The flex-fuel movement really began with the 1994 Ford Taurus, whose on-board computer told the engine how to distinguish between gasoline and higher ethanol blends. Pretty cool, right? Except for the part about it being a Taurus. I mean … just look: OK, I deliberately chose a sea-green one, for maximum dorkitude.

But FFVs have come a long way, baby. We sorted through the Renewable Fuel Association’s helpful brochure listing the 2018 vehicles that can run on any combination of gasoline and ethanol, up to 85 percent. And we arrived at our 10 favorites! While few would accuse the behemoth of being cool, in the traditional sense, we’re just glad there’s a Toyota FFV at all. The company put all its alt-fuel resources into hydrogen for a while, but then came the Prius Prime plug-in hybrid, America’s top-selling EV of 2017. Good to see Toyota giving customers fuel choice with the FFV Sequoia, as well as the FF-capable Tundra pickup. But yeesh, that mileage. The smallest Jeep comes loaded with goodies for 2018, including a backup camera standard on all configurations. There’s also an upgraded infotaiment system that includes a touchscreen (5.0-inch to 7.0), and Apple CarPlay and Android Auto. But the reason the Renegade isn’t higher on our list is a set of downsides (as chronicled by Car and Driver), which include a bloated weight (the Trailhawk is 3,532 pounds), which affects acceleration and hampers fuel economy. 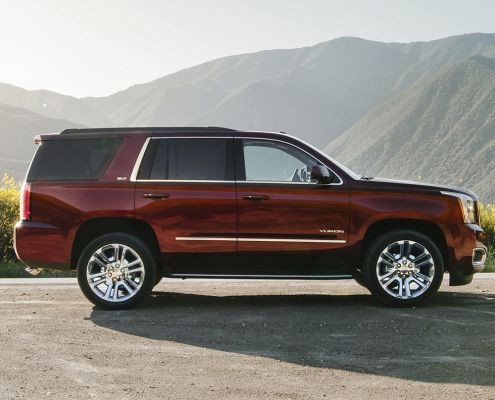 Whether you go with the regular version or the XL, with the Yukon you’re getting a comfortable, high-tech, versatile beast considered one of the most “road-trip-worthy” vehicles around. As a plus, it gets up to 23 mpg on the highway, according to FuelEconomy.gov, 6 more than the Sequoia. Ford made the Escape flex-fuel for 2010, ’11 and ’12, then took two years off. But it’s FF-compatible for 2017 and ’18. Good news for the future of this affordable crossover: Ford is souping up its line of SUVs, just as it has done with its sedans, with an ST version, and the Escape could be next in line for this treatment.

Sure, we could have told you about the 4.3-liter Silverado, or the 5.3, both of which are E85-compatible. But we’re going with the 2500HD, one of the big boys, because sometimes you just need a V-8 engine with 14,500 pounds of towing capacity to get your toys to the lake and back. But with a fuel economy of about just over 10 mpg combined city/highway, the Silverado’s fuel economy will drop further on E85 (exactly how much is an open debate). Yet another reason to run on E85: alleviating your guilt at driving such a fuel hog.

The big 300 gets 292 hp, 19/30 mpg, and is “one of the best American luxury sedans out there,” writes AutoGuide’s Jodi Lai, adding that “there’s no other car that has so much swagger and yet makes its driver feel so chill — and it’s also somewhat of a bargain.” What if you don’t need a gargantuan pickup but still want a versatile, affordable pickup? The Frontier is a great option, and the fact that it’s flex-fuel for a second straight year (Nissan’s Titan and Armada stopped being FFV after MY2015) is a bonus.

An old knock against the boss-looking Charger, currently in its seventh generation after relaunching the nameplate in 2006, is that it’s hard to handle in bad weather. Three years ago we wrote about a guy who bought a new Charger (or rather his dad bought it), and he didn’t mind fishtailing it around in the Michigan snow. But now the muscle car, with its 292-horsepower V-6 Pentastar engine, comes in all-wheel drive.

As one of the best-selling luxury SUVs on the market, you don’t want to take the GLE350 off-roading. “It’s a family wagon, first and foremost, and a very good one,” writes The Car Connection’s Marty Padgett. It’s loaded with features, has a strong safety

record, sports a 302-hp V-6 engine, and also comes in a plug-in hybrid version. The fact that there’s a flex-fuel configuration shows Mercedes-Benz’s commitment to fuel choice. The palette of available colors is even impressive: The one directly above is the Diamond White Metallic … alas, it doesn’t come in Kryptonite Green Metallic like the Mercedes GLA250 hatchback shown at the top, which is also flex-fuel.

There you have it! A flex-fuel vehicle for every taste and tax bracket. If you’re buying a new car this year, consider an FFV and all the benefits they can bring.

Toyota Embraces Hydrogen
To Use Less Oil, We Need To Think About Cars As Software Platforms
New Releases: Movies, DVDs and Netflix Streaming for Week of September 14th
Read before you download: What the critics said about PUMP
Winston, what would you do concerning natural gas?
Will Pittsburgh be the center of a CNG revolution?
Who Says Cars Have to Fill a Parking Space?
When California had 15,000 methanol cars
Our Mission: Fuel Freedom Foundation is working to reduce the cost of driving your existing car or truck by opening the market to cheaper, cleaner, American-made fuel choices at the pump.
The oil rally is helping renewables The great crude oil fireball test
Scroll to top