Blog - Latest News
You are here: Home / Featured / Economy / This is why you don’t remember engine knocking

The 1950s and ’60s were a time of soaring, unprecedented technological change in America. But wow, gasoline must have been crummy then.

Why else would there be so many additives for gasoline, designed to elevate an inherently dirty, inferior fuel to something that 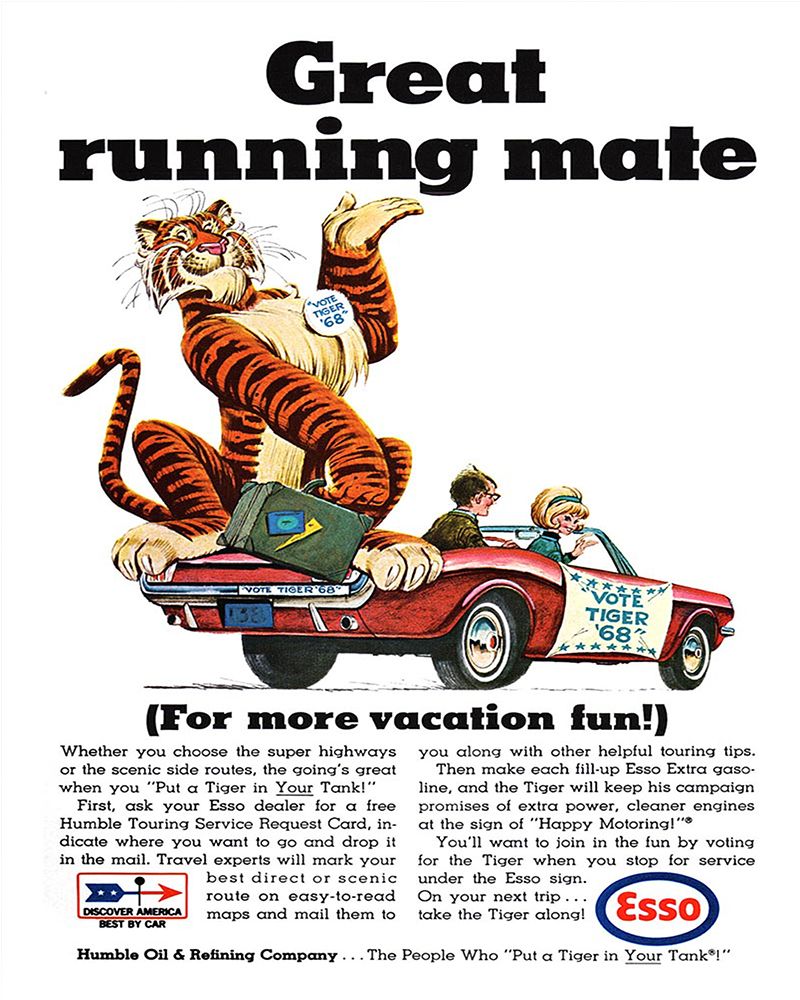 wouldn’t cause the family DeSoto to break down on the side of the road? Esso (the forbear to Exxon) told drivers to “Put a Tiger in Your Tank” with its New High-energy Esso Extra gasoline. Sinclair said Americans should buy its “magic” nickel-infused blend. (That jingle will become lodged in your brain the way Triple Dent Gum infiltrated Riley’s mind in “Inside Out.”)

The goal of such advertising was to help motorists avoid the dreaded “engine knock,” which was a real thing back then. Basically, poor-quality gasoline could cause the fuel to ignite prematurely. This not only caused an audible knock (like a rocking chair rolling over a bottle cap), it could lead, over time, to engine wear, damage and premature DeSoto death.

The antidote to this phenomenon was to boost the octane level of the gasoline, which is where all those additives came in. The booster of choice, for decades, was tetraethyl lead, or simply “leaded gasoline.” This 1950s commercial actually explains “knock” pretty well, and it would be quaint if the solution weren’t so dangerous:

The artist-narrator (don’t quit your day job for Disney) explains:

“Ethyl gasoline is a high-octane gasoline. Gives more power on the road. Because the higher the octane number, the better the gasoline. The less likelihood of knock. You see, fuel knock is when the gasoline vapor in the cylinder … well, it just explodes. … But with high-octane ethyl gasoline, there is no knock. The burning gases give the piston a smooth, powerful push, and that’s the difference.”

Mmm, mmm. Can you taste the smooth?

From the very start, there was evidence that lead caused serious neurological harm to the human brain, especially in children, but lead wasn’t phased out completely until 1996. Successor additives didn’t prove much better, and there are still harmful chemicals in today’s gasoline blends, as Urban Air Initiative points out. The nation’s gasoline supply already contains 10 percent ethanol, and we’re making the case that using more of this cheaper, cleaner fuel can elevate octane further, improving engine performance and fuel efficiency, while reducing emissions.

But back to knocking: Sophisticated, computer-guided fuel systems can arrest knocking before it even happens, so today’s drivers are about as aware of knock as they are 8-track stereo systems.

“They’ve never heard it. They don’t know what knock is, because the engines have been designed to never knock,” said John Eichberger, executive director of the Fuels Institute, a think tank founded by the National Association of Convenience Stores. Eichberger says automakers are “extremely concerned” that they can’t squeeze the best performance out of their engines and reach the EPA-mandated target of 54.5 mpg by 2025, because the octane rating of the fuel in the marketplace isn’t high enough. At the pump, the usual choices are regular (87 octane), mid-grade (89) and premium (91).

“If they can get a 96 [rating] or something like that, then they can design an engine specially optimized for that fuel, which would give you better efficiency, lower emissions and better performance,” Eichberger said.

Raising the octane rating across the country would provide many benefits to the public. But a big hurdle would be changing consumer behavior. Drivers have associated 87 octane with a lower price point for so long, would they buy a higher-octane fuel? They’d have to give up the idea that high octane is somehow only meant for luxury cars.

“The theory,” Eichberger says, “is some people feel, ‘I’m gonna to treat myself. When prices go down, I’m gonna treat my car by giving it a little sweeter gas, the 89 instead of 87.’ They think that, because they don’t know what it is. And they think, ‘Well, it’s more expensive, so it must be better.’ And when it gets too expensive, [they say], ‘You know what? My car has been eating pretty well … the car’s gotta take a little diet too.’

“You can research something forever. If your gut isn’t with you, you’re gonna throw the research out the window and justify a gut-instinct decision. And when it comes down to fueling your car, it’s not something people think about. They look at the price and they grab, and they go.

“So if we’re gonna change the fueling system in this country, we’ve got to really focus on, ‘How do we do that in a way that is going to be natural for the consumer to evolve into it?’ Anything unnatural is going to struggle mightily.”

Toyota Embraces Hydrogen
To Use Less Oil, We Need To Think About Cars As Software Platforms
Jason Bateman Narrates ‘Pump’
New Releases: Movies, DVDs and Netflix Streaming for Week of September 14th
Read before you download: What the critics said about PUMP
Winston, what would you do concerning natural gas?
Will Pittsburgh be the center of a CNG revolution?
When California had 15,000 methanol cars
Our Mission: Fuel Freedom Foundation is working to reduce the cost of driving your existing car or truck by opening the market to cheaper, cleaner, American-made fuel choices at the pump.
250-Mile Hyundai electric car in development 2016 set to be world’s hottest year on record, says UN
Scroll to top