Blog - Latest News
You are here: Home / Featured / Environment / What do Ann Landers and Abigail Van Buren have to say about marriage and... 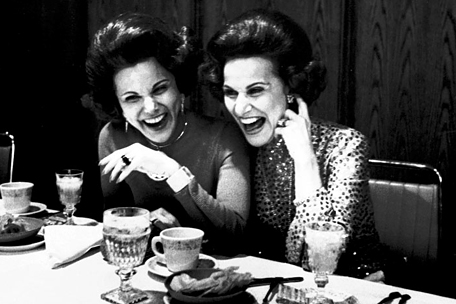 Ann Landers and Abigail Van Buren, well-known advisors and columnists for people with relationship issues, were, at one point in time, distant cousins of mine. So I was willingly exposed to daily columns about the lovelorn, love-confused and folks in need of love. Ms. Landers and Ms. Van Buren were actually sisters. They, however, didn’t like each other much. I bet you didn’t know that! Their words were generally wise; their advice was mostly cautious; and, at the time, their words were from a puritan bent. Sometimes they were funny, and rarely did they cater to the prurient interest. They were G-rated!

Last night, I caught up on reading my favorite newspapers and journals and, out of the blue, my mind wandered to my now-deceased former cousins – Ms. Landers and Ms. Van Buren. I bet either one could have addressed questions from depressed oil executives due to a lack of love for the industry from the general public. I think the last poll concerning reputations placed oil industry executives close to land speculators, exotic animal poachers, football deflaters and wife- or husband-beaters. The oil company executives appear to shoulder much of the blame for past high gasoline prices and the possible return of high prices, as well as increased GHG emissions and pollution. While other variables are involved, increased numbers of the public appear to hold oil executives responsible for America’s iterative need to risk boots on the ground or in the air in the Middle East to protect our access, or our allies’ access, to oil. Some executives appear to have taken the public’s negative perceptions to heart. My psychiatrist friends believe they carry much hidden guilt.

I have created a fictional letter from an oil executive going through therapy for depression because of his job and the possible related breakup of his marriage, and imagined the response from both Ann Landers and Abigail Van Buren. I wanted to help the poor executives. On reading my draft, the words seemed so real and so sad. The guy seemed to have manic-depressive characteristics. His letter and a response from one of the sisters follows:

I have a terrible problem. It’s affecting my marriage. I love my wife, even though sometimes I don’t understand her.

I should tell you that when I left college with a Wharton MBA, I wanted to change the world for the better. I thought I could do good and also make some money. Isn’t that what’s meant when political leaders say that America is an exceptional place? Capitalism with a heart and soul!
I honestly disagree with the economist Milton Friedman (or was it Alfred P. Sloan?) when one or the other said something like “the business of business is business.”

I am an executive at Exxon. I usually feel good every morning when I go to work. I believe that Exxon, through its oil and gas operations, has helped to power the United States. It’s provided mobility to residents, whether rich or poor. It generated jobs and income all over the world. What’s good for Exxon is good for the U.S.! Isn’t it? (Bring back “Engine” Charlie Wilson … do you remember the ex-secretary of defense?)

But my wife disagrees with me about Exxon. She has her Ph.D. from Harvard (you know, that school in Cambridge). She is a believer in alternative fuels, like ethanol. She thinks – or, I forgot, feels – that oil and gasoline are the scourge of the nation: bad for the environment, America’s security, personal health and well-being and the economy, and bad for what, I thought, was once a beautiful and romantic marriage.

Our present differences have resulted in large bills for marriage counselors. At our last session, which cost $350 for the hour, she told the counselor that she was happy that the oil company revenues have gone way down because of depressed demand, a surplus of global oil supplies, increased costs for drilling, the rise in value of the dollar and OPEC’s effort to sustain both production and relatively low oil prices. She seemed overjoyed, almost manic, that companies have reduced exploration for oil. The counselor’s response was, “Well you must feel good! Ending exploration will help save pristine sensitive areas like the Arctic Circle.” She seemed to have gone over a professional line. The counselor, to me, reflected a new breed. My wife and I were paying for part therapist, part advocate. She clearly was a Democrat. I was worried.

During our session, my wife seemed mean from time to time. At one point, in front of the therapist, she indicated that she was pleased that jobs are being lost in the oil sector. When I interrupted her to meekly note that my own high-paying job could be on the line if the oil market continues to be a downer, she gasped, full-throated, and said, “I told you so. It’s a lousy industry, a polluting industry and an industry that contributes to global warming. You should have left the company a long time ago.” After I started to cry (men do cry), she added, “I wouldn’t let our daughter [we don’t even have a daughter] go out with an oil executive and, if she married one, I would disown her.”

Our counselor was no help. All she could say were things like, “look at each other,” “think of good memories,” “talk to each other from your heart, particularly before you go to bed.” Hell, I just got a heart transplant, and it knows nothing. I also sleep on the couch since my wife got on the E85 kick! Please help me. We have a loveless, sexless, talk-less marriage. We are on the brink. What can I do? – DESPERATE OIL EXECUTIVE

My sister and I don’t want to say there is no hope for your marriage. We don’t often agree on anything, and we have relationship issues ourselves. Generally, when we are alone, however, both of our cups are half or more than half full. For you and your wife to survive as a couple, I think (and on this one, I am sure my sister would agree,) that you need to work a lot harder at understanding one another. It seems like you have not heard how strongly your wife feels about ending U.S. dependence on oil and gasoline. Give her respect! Her opinion is not yet a majority one, and it is courageous. She is a real thought leader. Be proud of her! To her, the need for alternative fuels has become both ideology and compelling wisdom. It’s part of her persona.

It appears that your wife has not heard about your passion for doing good while you work hard to bring home a large payroll stub every month. Maybe you have neglected your youthful passion and how important it was to you after college. Maybe the lack of passion in your love life relates to your own forgotten passion as a human being and professional. I can’t tell from here, but it’s worthy of examination.

Meanwhile, to help save your marriage, if you’re a believer, pray; if you are an agnostic, have faith; and if you are an atheist, believe in yourself or yourselves. Maybe you could do good and please your wife by helping convince your oil company to favor opening up its franchises to competition from alternative fuels and provide charging and blending pumps at each station. Talk to her! If she will let you, hold her tight (or at least hold hands), and while doing so tell her you both can find common ground. Buy her an electric-powered Prius or Tesla; maybe even an E85 high-octane EPA-approved Chevrolet. Give her the keys and say, “I love you”! Try to begin a new beginning. Maybe it will get you off the couch and help the nation move toward alternative fuels. I wish you and your wife good luck. Indeed, my friend Dinah Shore would want you both to “see the USA” in your new environmentally friendly, alternative-fuel Chevrolet. Many miles of happy driving, and may your renewed marriage be full of love and affection.

Toyota Embraces Hydrogen
To Use Less Oil, We Need To Think About Cars As Software Platforms
Jason Bateman Narrates ‘Pump’
New Releases: Movies, DVDs and Netflix Streaming for Week of September 14th
PUMP Releases Some Character Posters
Read before you download: What the critics said about PUMP
Winston, what would you do concerning natural gas?
Will Pittsburgh be the center of a CNG revolution?
Our Mission: Fuel Freedom Foundation is working to reduce the cost of driving your existing car or truck by opening the market to cheaper, cleaner, American-made fuel choices at the pump.
The global addiction to energy subsidies Bikers, boaters and Big Oil unite in fight against U.S. biofuels
Scroll to top