Blog - Latest News
You are here: Home / Featured / Economy / What is octane? 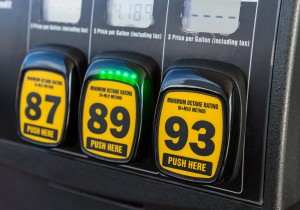 You pull into a gas station and are presented with three options: regular, mid-grade, or premium —all gasoline of course, as true fuel choice isn’t currently a reality in America. But have you ever wondered what those three numbers — 87, 89, and 93 or some similar variation — on the pump itself mean?

Sure, maybe you’ve heard that those numbers represent the rating of this thing called octane. But unless you know what octane is, and what it does, that answer is about as useful as telling someone unfamiliar with the stock market that the Dow is up three points.

The short answer is that octane is the measure of how much compression a fuel can withstand before igniting. Or, in layman’s terms, the higher the octane rating, the less likely the fuel is going to pre-ignite (read: explode unexpectedly) at higher pressures and damage your engine. That’s why performance cars with higher compression engines require higher octane (premium) fuel. In essence, higher octane fuels are compatible with higher compression engines that can increase efficiency and performance while potentially reducing emissions by combusting the fuel more completely.

That’s the short answer. The long answer is a bit more complicated, and requires some understanding of how, exactly, our cars turn the liquid fuels in our tanks into the energy that propels them down our roads. So put your learning caps on folks, class is officially in session.

In the image to left, we have an animation of what powers the vast majority of internal combustion engines (ICEs) on the road, known as the four-stroke cycle. During Step 1, the right tube (known as the intake valve) opens up while the piston simultaneously moves down. This brings a mixture of air and fuel (represented by blue) into the cylinder. Then in Step 2, the piston moves back up, compressing the air and fuel, increasing the temperature and pressure in the cylinder. Step 3 begins after the air/fuel mixture is ignited by the car’s spark plug. It’s this step that creates the energy that actually powers the car, with the force generated by the exploding air/fuel mixture pushing the piston back down, turning the car’s crankshaft, and ultimately propelling the car into motion. This is followed by Step 4, where the piston moves back up and pushes what’s left of the combusted air/fuel (known as exhaust and represented by brown) out of the left tube, or exhaust port. Then the cycle starts all over again.

So what does this have to do with octane? Everything, actually. As mentioned above, the higher the octane rating, the more the fuel can withstand greater pressures without pre-igniting. This allows for a variety of options that can increase power and efficiency while adding the ability to decrease emissions as well. These options include increasing the compression ratio, changing the timing of spark ignition, injecting less fuel into the cylinder, and more. Additionally, engines designed to work with higher octane also burn the fuel more completely — meaning less harmful emissions in exhaust. One MIT study even estimated that if higher octane fuels and engines designed for them became more widespread, the U.S. could cut our annual CO2 emissions by 35 million tons.

With that knowledge in hand, we can now come back to those numbers — 87, 89, and 93. 87 is the standard octane rating that most car engines are designed for. Or put another way, an octane rating of 87 or higher can withstand the compression ratios used in most cars. Anything lower and you risk engine damaging pre-ignition or knocking — processes that occur when the compression ratio generates more pressure and heat than the fuel can handle, causing it to combust early and push down against the piston while it is still moving upward in Step 2. And since 87 is the standard octane rating for the fuel most engines use today, the 89 and 93 octane rated fuels are only different because they can handle more heat and pressure before igniting on their own. This, in turn, means they can run in performance engines designed to use higher compression ratios. It also means that while higher octane fuels won’t hurt engines designed to run on 87 octane fuel, they won’t provide a benefit either.

And there you have it. Octane is simply a measure of how much heat and pressure a fuel can withstand before exploding, and — in tandem with a properly designed engine — a higher octane fuel can increase performance and efficiency while decreasing emissions.

Who Says Cars Have to Fill a Parking Space?
What Do Iceland and Israel Have in Common?
Bring back Woodstock and passion, and bring on replacement fuels
Is butanol the next big thing in biofuels?
Outnumbered 100-to-1, Methanol Is Upbeat
Are We Entering the Age of Batteries?
Can New Catalysts Turn the Corner for Methanol?
Hawks Are Out Again: Mistakenly Casting Doubt on Ethanol
9 replies

Our Mission: Fuel Freedom Foundation is working to reduce the cost of driving your existing car or truck by opening the market to cheaper, cleaner, American-made fuel choices at the pump.
How ISIS oil ended up on U.S. streets Even before they start breathing, babies can be harmed by air pollution, scientists...
Scroll to top